On a cryptocurrency of dynamic supply

January 26, 2022
0. Posts on this blog are ranked in decreasing order of likeability to myself. This entry was originally posted on 30.09.2021, and the current version may have been updated several times from its original form.  0.1 Largely a follow-up piece to this . Skip to section 2 if you don't care 'bout no intro. 1 Setting the stage 1.1 The economy under the division of labour is a massive and massively complex system with immense degrees of freedom. Commie silliness notwithstanding, only money, an emergent computer of comparable capability, is equal to the task of daily optimising resources such as to fulfill demand to the greatest degree possible. Money alone can run such calculations at any reasonable speed. 1.2 Calculations need to be run in the moment as well as in time, hence the true and core function of money as a unit of account. Medium of exchange kind of follows but may be in principle separated, while store of value can be entirely separated at no cost to anyone. 1.3 It
Post a Comment
Read more

On a credible alternative to liberal democracy

January 25, 2022
0. Posts on this blog are ranked in decreasing order of likeability to myself. This entry was originally posted on 22.11.2021, and the current version may have been updated several times from its original form. 0.1 The Tryptic Model of elections featured in part 2 of this post is not mine at all, but was devised by Fred Gohlke as practical democracy , to which system I'm making relatively minor changes mechanics-wise and explaining in my own words below. Still, though the system is almost unchanged, the context to which I apply Gohlke's idea couldn't be more different, the original tweak to empower real democracy made into a full alternative to liberal democracy. Thus, all resulting errors, departures from the original design or broader implications readers may choose to draw remain mine alone.   1 The First-Level Solution 1.1 I agree with those who see liberal democracy as a system with a built-in leftist bias, that takes a few generations to destroy once functional
Post a Comment
Read more

0. Posts on this blog are ranked in decreasing order of likeability to myself. This entry was originally posted on 24.01.2022, and the current version may have been updated several times from its original form.   1.1 Say you have a list of things you’d like to compare with regards to a number of criteria. Obviously, if all things are such as to be ranked in the same order across all of these criteria, comparisons are easy. What to do when entities are ranked differently with regards to different criteria though? 1.2 To make this less esoteric, let’s take a simple example: I wish to purchase a used vehicle, and the only relevant considerations are its price (the lower the better), its production year (the more recent the better) and its mileage (the lower the better). I have this narrowed down to six candidates. 1.3 Some are cheaper but have more miles, and/or are older, so not all three relevant criteria give you the same rank of the six options. Which do you pick? You could run
Post a Comment
Read more

0. Posts on this blog are ranked in decreasing order of likeability to myself. This entry was originally posted on 27.10.2021, and the current version may have been updated several times from its original form.   1.1 In a previous post I discussed a general method for removing outliers from a dataset given that one has a model. Let's try now to apply this to non-life claims reserving by triangles. 1.2 The cumulated triangle below includes one obvious outlier incurred in 2018, and emerging one year after. 1.3 Having a model of the data arranged in triangle form means breaking down the triangle into a vertical (exposure) and horizontal (pattern) component. These two are dependent on the choice of reserving method, with the additive method being an obvious example of splitting the triangle into two dimensions. 1.4 Let’s work with basic chain ladder instead. Now we could use year 0 claims as a measure of exposure and the cumulated development factors as a pattern, but this would
Post a Comment
Read more

January 19, 2022
0. Posts on this blog are ranked in decreasing order of likeability to myself. This post was originally posted on 13.10.2021, and the current version may have been updated several times from its original form. 0.1 The full presentation of this count can be found here , I’ll reproduce a shorter and less technical version  only (also, limited to the single winner case) in this post. 1 Getting to Iterated Bucklin 1.1 Iterated Bucklin derives from Bucklin (merged with Instant Run-off Voting ), and Bucklin voting itself can be thought of as a derivation of Approval Voting (not how Bucklin actually was derived AFAIK). Approval can in turn be thought of as deriving from plurality / majority / pick-one / first-pass-the-post voting. So Plurality -> Approval -> Bucklin -> Iterated Bucklin. 1.2 Approval voting improves on plurality in that you can vote for as many candidates as you wish (but you can’t give more than one vote to any one candidate, that'd be the inferior bloc
Post a Comment
Read more

On better measuring gains in the standard of living 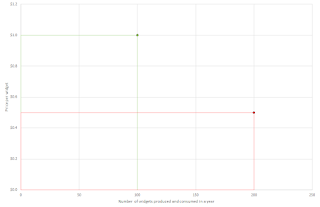 0. Posts on this blog are ranked in decreasing order of likeability to myself. This post was originally posted on 04.11.2021, and the current version may have been updated several times from its original form.   1. The Nominal 1.1 I was inspired to think of this when reading this post (h/t Astral Codex Ten ). All of the relevant critique of the post itself can be found in the comments, but it helped me realize there is something off with real GDP as a measure of standard of life. I will take the opposite view of Less Wrong though, and state that real GDP accounting overestimates gains in standard of life. 1.2 Let's take a simple economy that only produces and consumes widgets. I am not interested in nominal – real distinctions here, so I need not assume any more than one product class, and will stick to inflation not being a thing in this section. 1.3 In 2021, total production and consumption is of 100 widgets, sold for $1 each. In 2022, technology gains allow a massive incre
Post a Comment
Read more
More posts